5:1 Then sang Deborah and Barak the son of Abinoam on that day:

2   “That the leaders took the lead in Israel,
that the people offered themselves willingly,
bless the LORD!
3   “Hear, O kings; give ear, O princes;
to the LORD I will sing;
I will make melody to the LORD, the God of Israel.
4   “LORD, when you went out from Seir,
when you marched from the region of Edom,
the earth trembled
and the heavens dropped,
yes, the clouds dropped water.
5   The mountains quaked before the LORD,
even Sinai before the LORD, the God of Israel.
6   “In the days of Shamgar, son of Anath,
in the days of Jael, the highways were abandoned,
and travelers kept to the byways.
7   The villagers ceased in Israel;
they ceased to be until I arose;
I, Deborah, arose as a mother in Israel.
8   When new gods were chosen,
then war was in the gates.
Was shield or spear to be seen
among forty thousand in Israel?
9   My heart goes out to the commanders of Israel
who offered themselves willingly among the people.
Bless the LORD.
10   “Tell of it, you who ride on white donkeys,
you who sit on rich carpets
and you who walk by the way.
11   To the sound of musicians at the watering places,
there they repeat the righteous triumphs of the LORD,
the righteous triumphs of his villagers in Israel.
“Then down to the gates marched the people of the LORD.
12   “Awake, awake, Deborah!
Awake, awake, break out in a song!
Arise, Barak, lead away your captives,
O son of Abinoam.
13   Then down marched the remnant of the noble;
the people of the LORD marched down for me against the mighty.
14   From Ephraim their root they marched down into the valley,
following you, Benjamin, with your kinsmen;
from Machir marched down the commanders,
and from Zebulun those who bear the lieutenant’s staff;
15   the princes of Issachar came with Deborah,
and Issachar faithful to Barak;
into the valley they rushed at his heels.
Among the clans of Reuben
there were great searchings of heart.
16   Why did you sit still among the sheepfolds,
to hear the whistling for the flocks?
Among the clans of Reuben
there were great searchings of heart.
17   Gilead stayed beyond the Jordan;
and Dan, why did he stay with the ships?
Asher sat still at the coast of the sea,
staying by his landings.
18   Zebulun is a people who risked their lives to the death;
Naphtali, too, on the heights of the field.
19   “The kings came, they fought;
then fought the kings of Canaan,
at Taanach, by the waters of Megiddo;
they got no spoils of silver.
20   From heaven the stars fought,
from their courses they fought against Sisera.
21   The torrent Kishon swept them away,
the ancient torrent, the torrent Kishon.
March on, my soul, with might!
22   “Then loud beat the horses’ hoofs
with the galloping, galloping of his steeds.
23   “Curse Meroz, says the angel of the LORD,
curse its inhabitants thoroughly,
because they did not come to the help of the LORD,
to the help of the LORD against the mighty.
24   “Most blessed of women be Jael,
the wife of Heber the Kenite,
of tent-dwelling women most blessed.
25   He asked for water and she gave him milk;
she brought him curds in a noble’s bowl.
26   She sent her hand to the tent peg
and her right hand to the workmen’s mallet;
she struck Sisera;
she crushed his head;
she shattered and pierced his temple.
27   Between her feet
he sank, he fell, he lay still;
between her feet
he sank, he fell;
where he sank,
there he fell—dead.
28   “Out of the window she peered,
the mother of Sisera wailed through the lattice:
‘Why is his chariot so long in coming?
Why tarry the hoofbeats of his chariots?’
29   Her wisest princesses answer,
indeed, she answers herself,
30   ‘Have they not found and divided the spoil?—
A womb or two for every man;
spoil of dyed materials for Sisera,
spoil of dyed materials embroidered,
two pieces of dyed work embroidered for the neck as spoil?’
31   “So may all your enemies perish, O LORD!
But your friends be like the sun as he rises in his might.”


And the land had rest for forty years.

1Then sang Deborah and Barak the son of Abinoam on that day, saying,2Praise ye the LORD for the avenging of Israel, when the people willingly offered themselves.3Hear, O ye kings; give ear, O ye princes; I, even I, will sing unto the LORD; I will sing praise to the LORD God of Israel.4LORD, when thou wentest out of Seir, when thou marchedst out of the field of Edom, the earth trembled, and the heavens dropped, the clouds also dropped water.5The mountains melted from before the LORD, even that Sinai from before the LORD God of Israel.6In the days of Shamgar the son of Anath, in the days of Jael, the highways were unoccupied, and the travellers walked through byways.7The inhabitants of the villages ceased, they ceased in Israel, until that I Deborah arose, that I arose a mother in Israel.8They chose new gods; then was war in the gates: was there a shield or spear seen among forty thousand in Israel?9My heart is toward the governors of Israel, that offered themselves willingly among the people. Bless ye the LORD.10Speak, ye that ride on white asses, ye that sit in judgment, and walk by the way.11They that are delivered from the noise of archers in the places of drawing water, there shall they rehearse the righteous acts of the LORD, even the righteous acts toward the inhabitants of his villages in Israel: then shall the people of the LORD go down to the gates.12Awake, awake, Deborah: awake, awake, utter a song: arise, Barak, and lead thy captivity captive, thou son of Abinoam.13Then he made him that remaineth have dominion over the nobles among the people: the LORD made me have dominion over the mighty.14Out of Ephraim was there a root of them against Amalek; after thee, Benjamin, among thy people; out of Machir came down governors, and out of Zebulun they that handle the pen of the writer.15And the princes of Issachar were with Deborah; even Issachar, and also Barak: he was sent on foot into the valley. For the divisions of Reuben there were great thoughts of heart.16Why abodest thou among the sheepfolds, to hear the bleatings of the flocks? For the divisions of Reuben there were great searchings of heart.17Gilead abode beyond Jordan: and why did Dan remain in ships? Asher continued on the sea shore, and abode in his breaches.18Zebulun and Naphtali were a people that jeoparded their lives unto the death in the high places of the field.19The kings came and fought, then fought the kings of Canaan in Taanach by the waters of Megiddo; they took no gain of money.20They fought from heaven; the stars in their courses fought against Sisera.21The river of Kishon swept them away, that ancient river, the river Kishon. O my soul, thou hast trodden down strength.22Then were the horsehoofs broken by the means of the prancings, the prancings of their mighty ones.23Curse ye Meroz, said the angel of the LORD, curse ye bitterly the inhabitants thereof; because they came not to the help of the LORD, to the help of the LORD against the mighty.24Blessed above women shall Jael the wife of Heber the Kenite be, blessed shall she be above women in the tent.25He asked water, and she gave him milk; she brought forth butter in a lordly dish.26She put her hand to the nail, and her right hand to the workmen's hammer; and with the hammer she smote Sisera, she smote off his head, when she had pierced and stricken through his temples.27At her feet he bowed, he fell, he lay down: at her feet he bowed, he fell: where he bowed, there he fell down dead.28The mother of Sisera looked out at a window, and cried through the lattice, Why is his chariot so long in coming? why tarry the wheels of his chariots?29Her wise ladies answered her, yea, she returned answer to herself,30Have they not sped? have they not divided the prey; to every man a damsel or two; to Sisera a prey of divers colours, a prey of divers colours of needlework, of divers colours of needlework on both sides, meet for the necks of them that take the spoil?31So let all thine enemies perish, O LORD: but let them that love him be as the sun when he goeth forth in his might. And the land had rest forty years.

Share a poem or song that declares victory in Jesus. 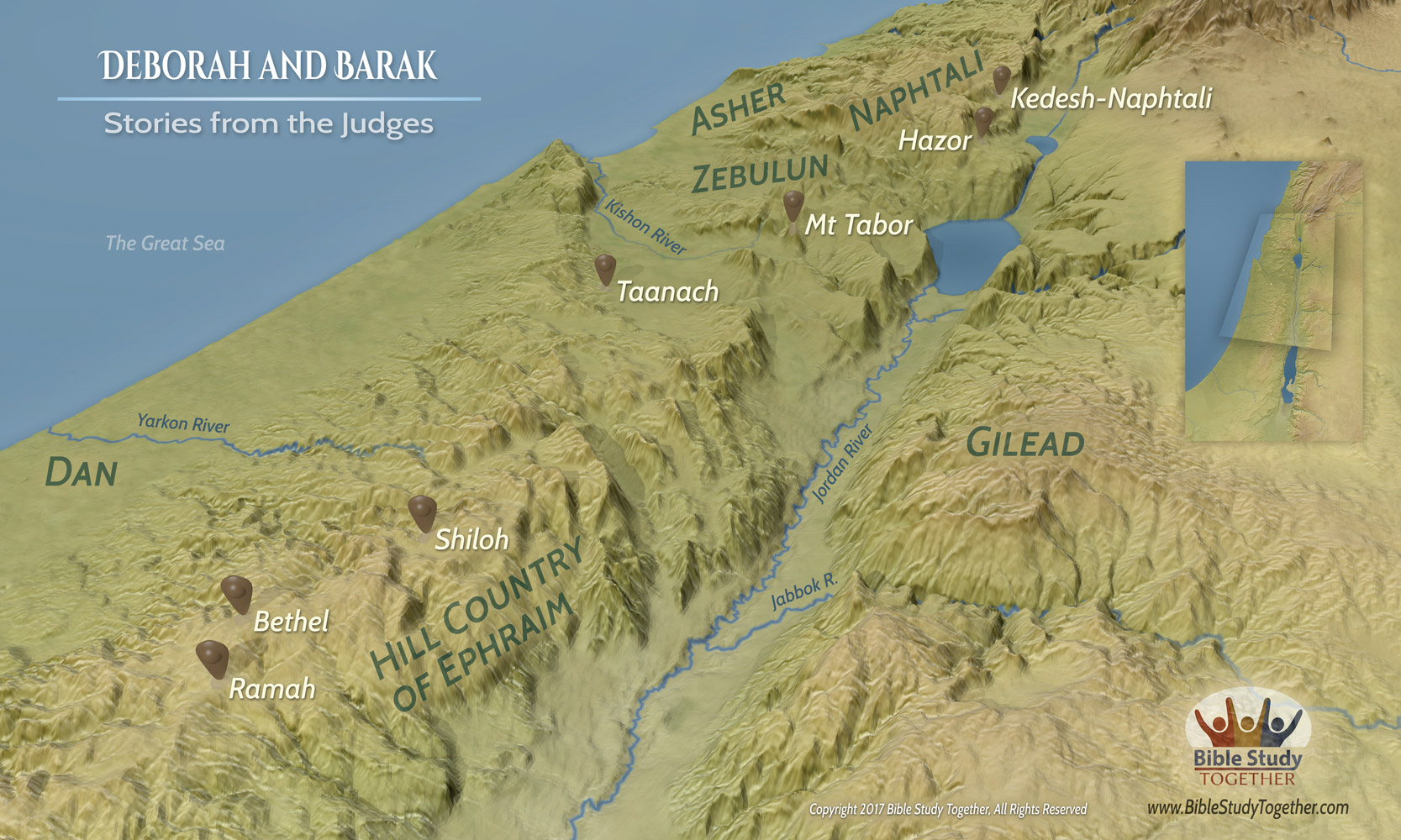