17:1 There was a man of the hill country of Ephraim, whose name was Micah. 2 And he said to his mother, “The 1,100 pieces of silver that were taken from you, about which you uttered a curse, and also spoke it in my ears, behold, the silver is with me; I took it.” And his mother said, “Blessed be my son by the LORD.” 3 And he restored the 1,100 pieces of silver to his mother. And his mother said, “I dedicate the silver to the LORD from my hand for my son, to make a carved image and a metal image. Now therefore I will restore it to you.” 4 So when he restored the money to his mother, his mother took 200 pieces of silver and gave it to the silversmith, who made it into a carved image and a metal image. And it was in the house of Micah. 5 And the man Micah had a shrine, and he made an ephod and household gods, and ordained one of his sons, who became his priest. 6 In those days there was no king in Israel. Everyone did what was right in his own eyes.

7 Now there was a young man of Bethlehem in Judah, of the family of Judah, who was a Levite, and he sojourned there. 8 And the man departed from the town of Bethlehem in Judah to sojourn where he could find a place. And as he journeyed, he came to the hill country of Ephraim to the house of Micah. 9 And Micah said to him, “Where do you come from?” And he said to him, “I am a Levite of Bethlehem in Judah, and I am going to sojourn where I may find a place.” 10 And Micah said to him, “Stay with me, and be to me a father and a priest, and I will give you ten pieces of silver a year and a suit of clothes and your living.” And the Levite went in. 11 And the Levite was content to dwell with the man, and the young man became to him like one of his sons. 12 And Micah ordained the Levite, and the young man became his priest, and was in the house of Micah. 13 Then Micah said, “Now I know that the LORD will prosper me, because I have a Levite as priest.”

18:1 In those days there was no king in Israel. And in those days the tribe of the people of Dan was seeking for itself an inheritance to dwell in, for until then no inheritance among the tribes of Israel had fallen to them. 2 So the people of Dan sent five able men from the whole number of their tribe, from Zorah and from Eshtaol, to spy out the land and to explore it. And they said to them, “Go and explore the land.” And they came to the hill country of Ephraim, to the house of Micah, and lodged there. 3 When they were by the house of Micah, they recognized the voice of the young Levite. And they turned aside and said to him, “Who brought you here? What are you doing in this place? What is your business here?” 4 And he said to them, “This is how Micah dealt with me: he has hired me, and I have become his priest.” 5 And they said to him, “Inquire of God, please, that we may know whether the journey on which we are setting out will succeed.” 6 And the priest said to them, “Go in peace. The journey on which you go is under the eye of the LORD.”

7 Then the five men departed and came to Laish and saw the people who were there, how they lived in security, after the manner of the Sidonians, quiet and unsuspecting, lacking nothing that is in the earth and possessing wealth, and how they were far from the Sidonians and had no dealings with anyone. 8 And when they came to their brothers at Zorah and Eshtaol, their brothers said to them, “What do you report?” 9 They said, “Arise, and let us go up against them, for we have seen the land, and behold, it is very good. And will you do nothing? Do not be slow to go, to enter in and possess the land. 10 As soon as you go, you will come to an unsuspecting people. The land is spacious, for God has given it into your hands, a place where there is no lack of anything that is in the earth.”

11 So 600 men of the tribe of Dan, armed with weapons of war, set out from Zorah and Eshtaol, 12 and went up and encamped at Kiriath-jearim in Judah. On this account that place is called Mahaneh-dan to this day; behold, it is west of Kiriath-jearim. 13 And they passed on from there to the hill country of Ephraim, and came to the house of Micah.

21 So they turned and departed, putting the little ones and the livestock and the goods in front of them. 22 When they had gone a distance from the home of Micah, the men who were in the houses near Micah’s house were called out, and they overtook the people of Dan. 23 And they shouted to the people of Dan, who turned around and said to Micah, “What is the matter with you, that you come with such a company?” 24 And he said, “You take my gods that I made and the priest, and go away, and what have I left? How then do you ask me, ‘What is the matter with you?’” 25 And the people of Dan said to him, “Do not let your voice be heard among us, lest angry fellows fall upon you, and you lose your life with the lives of your household.” 26 Then the people of Dan went their way. And when Micah saw that they were too strong for him, he turned and went back to his home.

27 But the people of Dan took what Micah had made, and the priest who belonged to him, and they came to Laish, to a people quiet and unsuspecting, and struck them with the edge of the sword and burned the city with fire. 28 And there was no deliverer because it was far from Sidon, and they had no dealings with anyone. It was in the valley that belongs to Beth-rehob. Then they rebuilt the city and lived in it. 29 And they named the city Dan, after the name of Dan their ancestor, who was born to Israel; but the name of the city was Laish at the first. 30 And the people of Dan set up the carved image for themselves, and Jonathan the son of Gershom, son of Moses, and his sons were priests to the tribe of the Danites until the day of the captivity of the land. 31 So they set up Micah’s carved image that he made, as long as the house of God was at Shiloh.

17:1And there was a man of mount Ephraim, whose name was Micah. 17:2And he said unto his mother, The eleven hundred shekels of silver that were taken from thee, about which thou cursedst, and spakest of also in mine ears, behold, the silver is with me; I took it. And his mother said, Blessed be thou of the LORD, my son. 17:3And when he had restored the eleven hundred shekels of silver to his mother, his mother said, I had wholly dedicated the silver unto the LORD from my hand for my son, to make a graven image and a molten image: now therefore I will restore it unto thee. 17:4Yet he restored the money unto his mother; and his mother took two hundred shekels of silver, and gave them to the founder, who made thereof a graven image and a molten image: and they were in the house of Micah. 17:5And the man Micah had an house of gods, and made an ephod, and teraphim, and consecrated one of his sons, who became his priest. 17:6In those days there was no king in Israel, but every man did that which was right in his own eyes. 17:7And there was a young man out of Bethlehemjudah of the family of Judah, who was a Levite, and he sojourned there. 17:8And the man departed out of the city from Bethlehemjudah to sojourn where he could find a place: and he came to mount Ephraim to the house of Micah, as he journeyed. 17:9And Micah said unto him, Whence comest thou? And he said unto him, I am a Levite of Bethlehemjudah, and I go to sojourn where I may find a place. 17:10And Micah said unto him, Dwell with me, and be unto me a father and a priest, and I will give thee ten shekels of silver by the year, and a suit of apparel, and thy victuals. So the Levite went in. 17:11And the Levite was content to dwell with the man; and the young man was unto him as one of his sons. 17:12And Micah consecrated the Levite; and the young man became his priest, and was in the house of Micah. 17:13Then said Micah, Now know I that the LORD will do me good, seeing I have a Levite to my priest.

Pray and reach out to someone who has strayed from God. 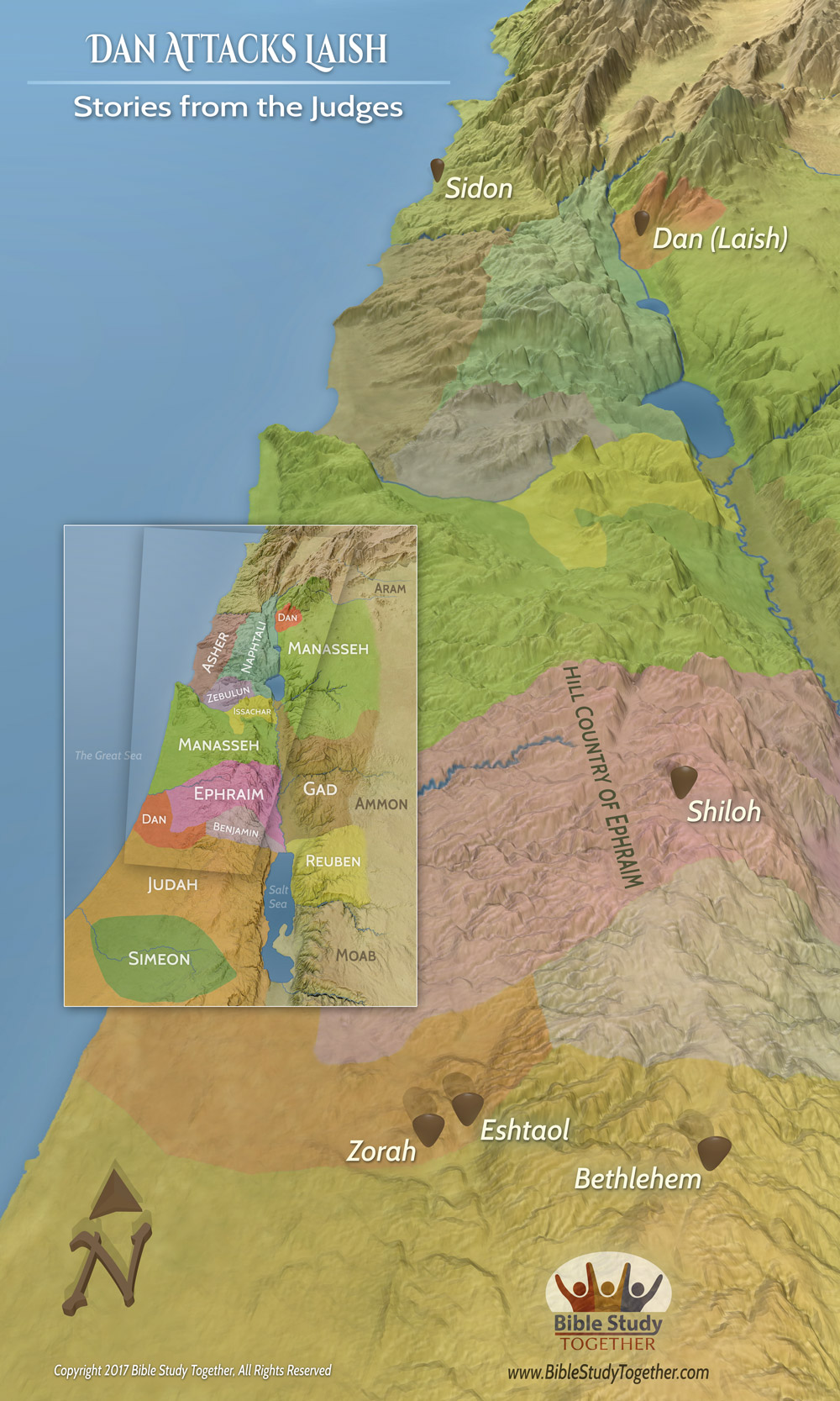